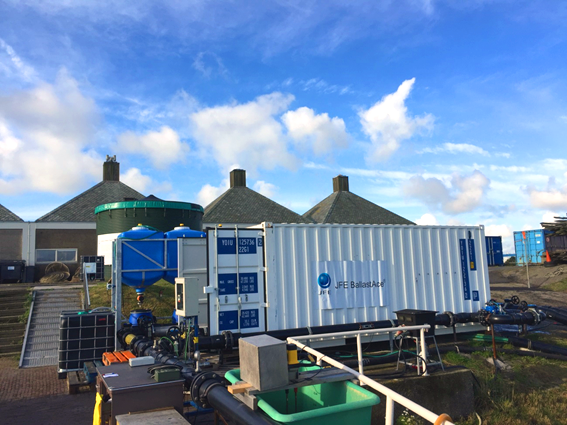 JFE BallastAce® is a combination treatment system which removes large size of marine organisms through a filtration system and sterilizes small plankton and bacteria by appropriate chemical agent. The performance of JFE BallastAce® is highly rated in terms of its effective treatment capability, low risk of mechanical failure derived from the simple system configuration, and so on. Since obtained IMO-based type approval※2 in May 2010, it has been delivered to over 400 ships all over the world.

To protect the marine environment from invasive species carried in ships’ ballast water, the International Maritime Organization (IMO) adopted the Ballast Water Management Convention in 2004, and the Convention entered into force on 8 September, 2017. On the other hand, the United States constituted an original stringent ballast water management regulations. Ships calling the United States ports are required to install ballast water management system with USCG type approval※3.

In order to comply with both USCG regulations and IMO convention, all ocean going ships shall install ballast water management system (BWMS) for around the next 7 years.
As a leading company embracing policies to preserve the world’s marine environment, JFE Engineering will continue to propose the optimal BWMS which can be adopted to all ships of various types and sizes and easy to operate.

※1 Ballast Water Management System(BWMS)
Ballast water is seawater that ships carry to maintain its balance. Ballast water is normally taken on in ballast tanks in the ship’s bottom at the unloading port, and then discharged at the loading port. The BWMS is a system that processes marine organisms carried by ballast water without destroying the ecosystem.